Rainer Hersch and the Corporate World

When I first started the Rainer Hersch Orkestra, a favourite occupation was entertaining at company dos.  Awards ceremonies, receptions, anything we could get our greedy hands on frankly because, as is generally known in the biz, corporate events mean decent dosh and nice eats.  And we did them all – everything from birthdays to banks.  OK not all were exactly gripping and there were some really dull ones.  The really, really dull ones shall remain nameless – they’ll have to because I can’t actually remember the names – not now, not even then.  At a performance for some investors magazine I even had to write the name on the back of my hand to slyly refer to every time it came up.  In spite of this…ahem…minor difficulty they always went well.

Or is … ‘nothing succeeds like a parrot with no teeth’

Then, one day, a request came from an agent for me to present something not at the jolly at the end of the company conference but IN it.

Leadership, motivation, teamwork, communication, how the orchestra works – that kind of thing.

I prevaricated but, after sitting in a darkened room with whale song on the hi-fi for a week or so, I realised that maybe this wasn’t so crazy after all.  Consider this: just like companies, orchestras have departments (sections), with heads (principals).  And, just like in companies, all these sections have to work together without any real knowledge of what the other is up to.  The aim being to produce something bigger than the sum of the individual parts. Oh yes – the more I thought about it, the clearer the whole thing became:

The only person with the blueprint (score) for the product (concert) that the orchestra is presenting to its customers (audience) is the conductor (CEO). 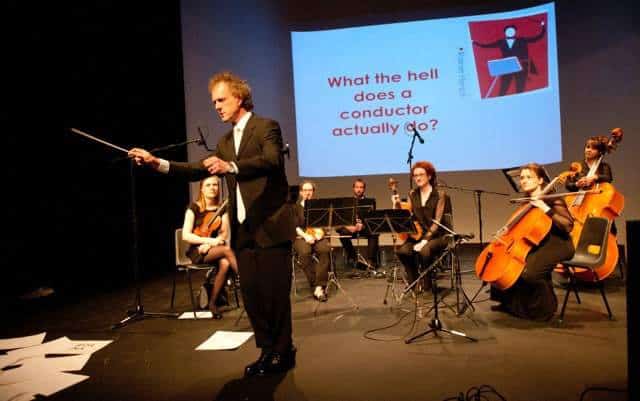 What the hell does a conductor actually do?  Yes, some of my orkestra have asked that from time to time.

From this – what does a conductor actually do.  Everybody imagines that he/she is God but they really aren’t.  Most conductors don’t even pretend to be better musicians than the people they are waving that stick in front of.  The trick is merely to know the piece you are trying to conduct well.  If you study anything for long enough, you’ll come up with a version of how it goes.  Then you just have the humanity to convince the individual players to participate in your design, irrespective of how they might do it themselves.

Well, I did it once and now I can’t stop.  These days, I am much less often asked to be the turn at the end of company events and more the person who imparts such nuggets.  And, while I dreaded the very idea at the beginning I now find it a pleasure to explore what business can learn from the symphony orchestra with new people; tell them about something that hadn’t even occurred to them and have a laugh.  Because what I try to do is fun too and full of gags, audience games and whatnot.  It has also taught me something – musical appreciation is most definitely not the sole preserve of musicians. Because as someone once said:

‘Musicians talk of nothing but money and jobs. Give me businessmen every time. They really are interested in music.’

[raises hand and surreptitiously glances at name written there in biro]…

Yes, it was the composer Jean Sibelius who said that! 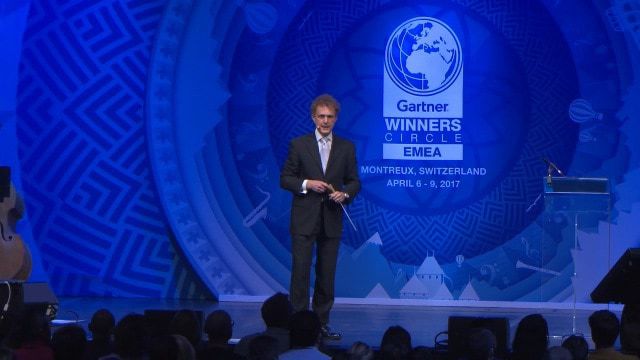 Looking the business at recent presentation. Two days in Montreux, Switzerland. Yes, this business stuff is hard work but someone has got to do it.